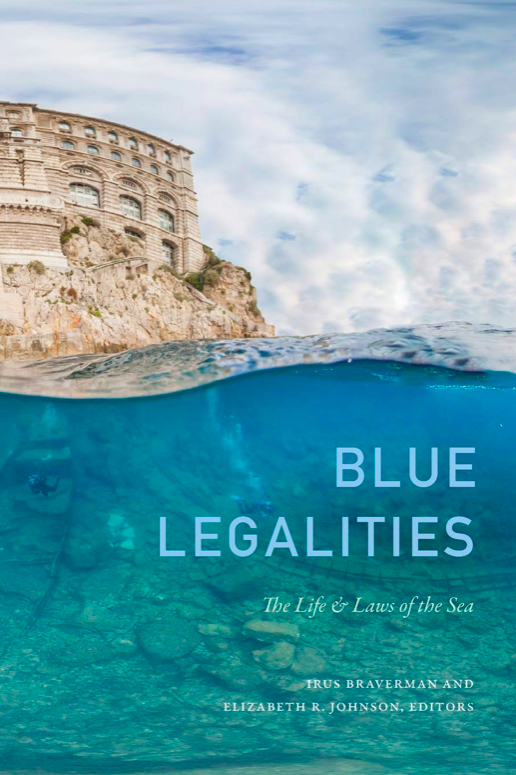 The United Nations Convention on the Law of the Sea (UNCLOS) has been heralded as one of the most comprehensive and most im- pressive legal instruments ever concluded under the auspices of the United Nations. And indeed, this ‘constitution of the oceans’ is an impressive legal document comprising 320 articles and touching upon a myriad of ocean-relevant topics.

Blue Legalities—The Life and Laws of the Sea, edited by Irus Braverman and Elizabeth R. Johnson, explicitly deals with the inter- play of the UNCLOS, law and the oceans. It is not an introductory volume to the UNCLOS and its contents,1 but rather a very critical view on the deeply anthropocentric approach of the legal regulation of the oceans. Fifteen chapters, plus an Introduction and an Afterword, tackle this complex issue and one might expect a bone- hard legal treatise. Yet, upon reading the first lines of the opening chapter by Susan Reid, it becomes abundantly clear that this volume is of a different nature. Indeed, the book focuses on law and legal thinking but, inspired by the blue turn in the social sciences and hu- manities, makes the human mind—or rather human’s perception— essentially a core aspect of its scope: how do we humans see the ocean? What are its values, for whom and for what purpose?

And it is precisely the chapter by Susan Reid which provides for a fantastic opening of the book as it challenges the UNCLOS and its ocean-partitioning scope. Using the example of deep-sea mining, Reid calls for a more inclusive and less compartmentalized ocean law: a legal regime that is truly aiming for conservation instead of applying different ethics to living and non-living resources—which in the end depend on each other and cannot exist without one another. Seeing the ocean through a resource lens inevitably leads to undesir- able impacts on the oceans.

One of these unforeseeable impacts is dealt with by Astrida Neimanis and her account of the dumped chemical weapons that can be found in the Gotland Deep in the Baltic Sea. The lack of account- ability and the long-lasting effects of mustard gas on the seafloor and the world’s oceans make it inevitable to develop legal frame- works that do not just tackle the status quo but also aim to reduce the threats of such events in the long run. Making use of Stacy Alaimo’s concept of ‘transcorporeality’, which essentially represents the interconnectedness of the living and non-living worlds, similar to Susan Reid in the preceding chapter, Neimanis calls for a legal sphere that incorporates the dynamic stages of the benthic world.

A fascinating critique of the maritime zoning of UNCLOS is then given by Katherine Sammer in her chapter on ‘Kauri and the Whale’. By referring to the ontologies of the Maōri in New Zealand, she shows how the binary nature of sea versus land is not necessarily applicable for indigenous peoples, for whom there is a clear transi- tion between land and sea.2 The regulation of the exclusive eco- nomic zone remains a legal grey zone, in so far that governments, including the New Zealand government, attempt to limit the free- dom of navigation of nuclear vessels, whalers or protesters. Such zoning and management methods of marine areas therefore disre- gard indigenous ontologies significantly and essentially perpetuate a colonial heritage.

In their chapter on ‘Edges and Flows’, Steinberg, Kristoffersen and Shake deal with the legal and managerial ambiguities that sea ice, or more precisely, the sea ice edge creates. Taking the sea ice edge of the Barents Sea as an example, the authors show how despite various uncertainties the ice edge is simplified to become a line on a map, based on which management decisions—such as the form of drilling licenses—can be made. This approach completely disregards the transitory characteristics of the ice edge, which is not static but moves (on average) up north due to climate change, and which is el- ementary for the globe’s ecosystems. This great insight into the logic of ocean governance is crucial to further advance our understanding of the applicability of the UNCLOS and domestic legislations.

In Jennifer Gaynor’s chapter, we learn of the difficulties that sur- round the application of the UNCLOS with regard to rocks and artifi- cial islands. The chapter uses the South China Sea and the prominent cases of Chinese island fortification as its main case study. However, the author presents even more cases from the same region that have not entered the public mind, including the Philippines, Malaysia, Indonesia and Singapore. It is shown how complex the application of the UNCLOS can be and how seemingly small issues such as names of islands have tremendous impact on domestic politics and inter- national law.

Unfortunately, the scope of this review does not allow for a presentation of each of the chapters of this outstanding book. So instead of tackling each of the chapters, I will pick some selected ones from now on. This is not to say that the ones I have skipped do not merit mentioning, but rather that they should serve as a way to motivate the RECIEL audience to read this book.

Let me pick two more examples that demonstrate the unique- ness and the intellectual value of this volume. For instance, I was fascinated by Irus Braverman’s chapter on deep-sea robots. While it is easy to equate self-acting robots with heartless terminators, in the case of deep-sea habitat preservation they might prove quite useful—albeit costly—since they are able to work when and where humans cannot. However, since the UNCLOS does not consider robotic vehicles, their activities remain largely unregulated. In how far the new United Nations Agreement on Biodiversity Beyond National Jurisdiction, which is currently under negotiation, will ac- commodate these new technologies, remains to be seen.

A similar topic is picked up by Elizabeth Johnson in the form of unmanned military vehicles in the oceans. She demonstrates how the logic of the United States (US) military considers the deep sea as merely one of the arenas where it can operate. In a similar vein, the establishment of the Space Force under former US President Donald Trump underlines that also space is an arena for the US military to operate in. And indeed, the freedom of the seas, particularly in the form of the high seas, makes the military importance of unmanned bases or vehicles ever more important. After all, there is no need for diplomatic efforts to install a base, nor is there a need for immense financial burdens that need to be carried. This chapter shows how modern technology militarizes a legal space in the spirit of global military presence and capabilities.

As a final exemplary chapter, I would like to draw attention to Zsofia Korosy’s treatise on the interplay between the historic questfor whales by the British, cartography and conflict in 18th-century Pacific Ocean. While the information itself is not necessarily new, in the context of the present volume it is important to note—as the author herself does in her conclusion—that even though times, space and resources change, the underlying processes of using the quest for resources as a means to establish legal and political regimes still remain.

Blue Legalities is truly one of the most enjoyable books I have had the pleasure to read on selected case studies and ocean law. It shows, in many different ways, how modern technologies, histories, interpretations, narratives or perceptions consistently challenge the existing legal regimes of more-than-human oceans and also reform or invigorate them. Apart from the legal elements in the book, which are, of course, of very high interest for legal scholars, the book is a gold mine for those wishing to learn more about oceans’ uses be- yond the commonly known. It is therefore relevant for all those in- terested in the legal oceans but also for those wishing to learn more about conservation issues, histories or the military. In addition, cul- tural dimensions are also touched upon and linked to legal questions. This book is a great accomplishment and I can only very highly recommend it.

Bibliographic information of the reviewed version: